On Thursday, February 7, 2019, Riverhead Community Coalition for Safe and Drug-Free Youth was awarded the Coalition of Excellence Award for Intermediate Outcomes at CADCA’s 29th Annual National Leadership Forum. Approximately 3,000 community leaders were in attendance at the event hosted by Community Anti-Drug Coalitions of America (CADCA), the nation’s leading substance abuse prevention organization. The forum was held Feb. 4-7, 2019, at the Gaylord National Hotel and Convention Center in National Harbor, MD, just outside Washington DC.

The Coalition of Excellence award is part of CADCA’s GOT OUTCOMES! award program, which gives national recognition to exemplary coalitions that have clearly documented their impact on population-level substance abuse outcomes. This is the second consecutive Coalition of Excellence Award for the coalition, which received the award for Short-Term Outcomes at last year’s forum.

“We congratulate the Riverhead Community Coalition on the outstanding prevention outcomes they have brought to their community over the past several years,” said General Arthur T. Dean, CADCA’s Chairman and CEO, in November when the awards were announced. “The coalition’s efforts have led to a decrease in the percentage of adult [survey] respondents who report having unused, unwanted and expired medication in their home, from 52.4% in 2013 to 37.9% in 2018. The percentage of youth respondents who report that it is easy or very easy to get prescription drugs also decreased from 36.3% in 2008 to 27.48% in 2017.” According to CADCA, coalitions who utilize a holistic, multi-sector approach are able to engage the entire community, achieve sustainable outcomes, and truly change social norms relative to substance use and misuse.

In their application, the coalition demonstrated their efforts to address the issue of youth substance use by using a comprehensive set of environmental strategies. Youth members developed and recorded radio PSAs to educate community members about medication safety and the 24/7 medication drop box in the lobby of the Riverhead Police Department. The coalition partnered with law enforcement to increase and implement on-site medication take backs for senior communities, drive-through drug drop-off at take back events, provide signage and resources for these events in Spanish, and provide training and administrative support to these events. Finally, the coalition partnered with physician offices and pharmacies to raise awareness about proper medication safety and disposal. Through these efforts, over 5,800 pounds of medication were collected and disposed of since 2014, reducing youth access to and abuse of these drugs, which prevents future opioid and heroin abuse.

“On behalf of our coalition members and the Riverhead community, we were once again honored to be recognized by CADCA for the positive outcomes we have achieved collaboratively,” said Felicia Scocozza, executive director of Riverhead Community Awareness Program, Inc. (CAP), the lead coordinating agency for the Riverhead Community Coalition. Scocozza and coalition coordinator Kelly Miloski submitted the application on behalf of the coalition, which was recently awarded an additional five years of federal Drug-Free Communities (DFC) funding through 2023 from the White House Office of National Drug Control Policy (ONDCP). Created by the Drug-Free Communities Act of 1997, the DFC Support Program is the nation’s leading effort to mobilize communities to prevent youth substance use and provides grants to community coalitions to strengthen the infrastructure among local partners to create and sustain a reduction in local youth substance use.

In addition to receiving the award, Scocozza participated in a private meeting with Dr. Jerome M. Adams, the Surgeon General of the United States, who was also the keynote speaker for the event. “Healthier communities are safer communities,” said Dr. Adams, referring to successful partnerships between law enforcement and community coalitions. Scocozza and Miloski also presented a session entitled, Transforming from an Advisory Board to an Active Coalition, which showcased the steps the Riverhead Community Coalition took to expand membership, participation, leadership and collaboration. Along with Riverhead Police Chief David Hegermiller and CAP community prevention specialist Cynthia Redmond, they met with Senator Chuck Schumer and a representative from Congressman Lee Zeldin’s office during Capitol Hill Day. 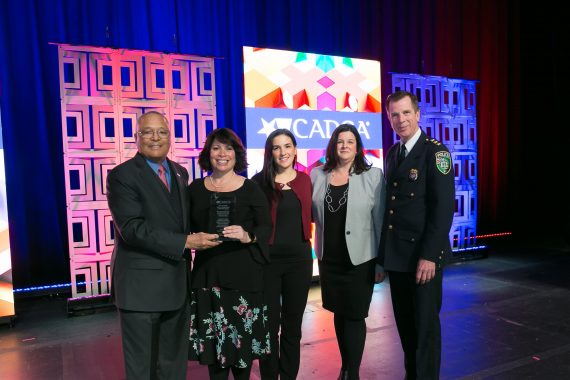