Ms. Fulford founded The Butterfly Effect Project in 2014. It’s mission is to create safe spaces for girls to dream and succeed. The program started with eight girls. Today it has over 600 “butterflies” in addition to 17 boys or “mosquitos.” There are now 17 chapters throughout the east end communities.

“I wanted to create a safe space for young women to thrive,” said Fulford. “Because everyone deserves the opportunity to reach their full potential.”

Tijuana Fulford grew up in Riverhead. She participated in the CAP program while she was a student at Pulaski Street Elementary School. She said the program gave her “the courage and community to say ‘No’ to drugs.” It also gave her the skills to make healthy choices and cope with substance abuse in her family.

“Saying yes to drugs is saying no to your future,” she said.

“Ms. Fulford has spent her life empowering youth, giving them valuable life skills. These include self-esteem, confidence, accountability, and reliability,” said Felicia Scocozza, executive director of Riverhead CAP. “These skills align with those addressed in CAP’s two-year prevention program. They include setting goals, making healthy decisions, being a good friend, and saying no to substance use and yes to opportunities. She is an excellent role model and has a positive message for Riverhead youth.”

Ms. Fulford was named 2016 Person of the Year by the Riverhead News Review. She is also a certified Master Life Coach. She recently published her first book, My Fabricated Truth: The Time My Mirror Deceived Me. The book is geared towards youth and deals with difficult topics. She said the goal of the book is to make it easier to start conversations about these topics.

Since 1983 Riverhead Community Awareness Program, Inc. (CAP), a nonprofit organization, has been providing drug and alcohol prevention, education and counseling programs for the Riverhead Central School District. CAP is best known for its two-year prevention program serving over 800 fifth and sixth graders in Pulaski Street School each year. The Too Good for Drugs program, taught by community volunteers and student peer leaders, concludes with the annual Say NO to Drugs March. Although the goal of the program is to prevent and delay underage drinking and drug use in youth, its evidence-based foundation is rooted in building self-esteem and increasing healthy decision-making skills.

According to Scocozza, the CAP march celebrates the conclusion of the two-year program. Due to COVID-19 restrictions, the march was cancelled in 2020 and 2021, although the program continued virtually.

The 35th Annual Say NO to Drugs March begins at 9:30 a.m. on Friday, June 10th, in front of Pulaski Street School; heads south on Roanoke Avenue, then west on 2nd Street, returning to Pulaski Street School via Griffing and Hallett avenues. You can view the parade route here. Following the march, there will be a brief ceremony on the steps of Pulaski Street School in which Ms. Fulford will address the students and community along with the Riverhead Town Board and other elected officials. After the ceremony, the Loyal Order of Moose Lodge #1742 will once again generously serve a picnic lunch to all of the students.

View photos of the 34th Annual Say NO to Drugs March here and a video here. 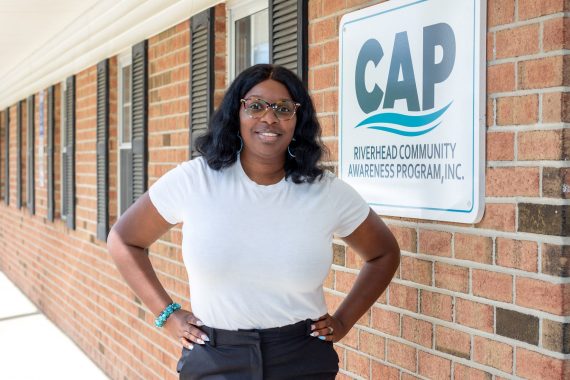