Riverhead CAP and Suffolk County Partners in Prevention (PIP) are launching a #JustCall social media campaign beginning November 19th. The campaign focuses on empowering communities with information about the Social Host Law. It will also give Suffolk County residents the tools to recognize violations. The goal is to keep youth safe.

The Suffolk County Social Host Law enforces penalties for anyone over 18 who knowingly allows underage drinking to take place in their home. This applies to anyone who owns, rents or is otherwise responsible for a home. It also includes anyone who fails to take reasonable corrective action upon learning that underage drinking is taking place in their home. According to the Surgeon General, young people who start drinking before the age of 15 are five times more likely to develop alcohol-related problems later in life and are at increased risk of using or misusing other substances. The county expanded the law in 2018 to include illegal drug use.

The #JustCall campaign will provide social media messaging daily. It will run between November 19th – 25th. The campaign will culminate on Thanksgiving Eve, which is historically a dangerous underage drinking occasion. According to MADD, “Blackout Wednesday” was coined to describe a spike in alcohol sales and an increase in the number of people, including young people, connecting with friends prior to Thanksgiving.  As a result, the Wednesday night before Thanksgiving is one of the most fatal nights of the year with regard to drunk driving and underage drinking. MADD says that this night is a bigger party night than prom night or even graduation night.

Suffolk County Executive Steve Bellone announced the #JustCall campaign at his press conference on Tuesday. He also stressed the importance of complying with Governor Cuomo’s COVID-19 ten-person limit for gatherings in private residences. He credited the partnership between PIP and the Suffolk County Dept. of Health for raising awareness on both of these fronts in order to keep residents safe.

“Drinking and the flouting of social distance guidelines can be a really bad combination,” Bellone said. “As we approach one of the biggest party nights of the year for younger residents, small gatherings that may seem harmless may lead to a spreader event.

“As a community, we need to keep our young people safe,” he added.

“We are very pleased to collaborate with Partners in Prevention on this campaign,” said Dr. Gregson Pigott, Suffolk County Health Department Commissioner in a press release Wednesday.

Riverhead CAP encourages other local organizations to participate. PIP’s goal is to have these messages and supporting graphics reach all areas of Suffolk County. Each post will also contain a hotline number to report underage drinking parties (1-866-UNDER21).

“The #JustCall campaign is a targeted way for community members to learn about the social host law,” said Janine Marc-Anthony, Riverhead CAP Community Prevention Specialist. Marc-Anthony participates in PIP on behalf of CAP and helped develop the campaign. She added that keeping youth safe is “something everyone can support.”

“To prevent underage drinking and violations of the Social Host Law in Riverhead, we will be adding additional patrols on Thanksgiving Eve,” said Chief of Police, David Hegermiller. He added that is a result of the partnership with the Riverhead Community Coalition for Safe and Drug-Free Youth.

“We will also utilize our variable message signs throughout town to remind residents to comply with both the Social Host Law and NYS COVID-19 gathering restrictions.” 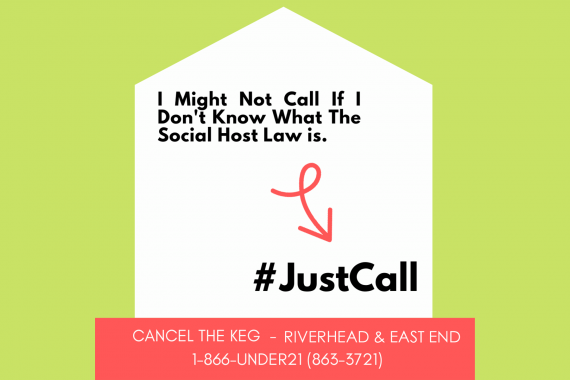